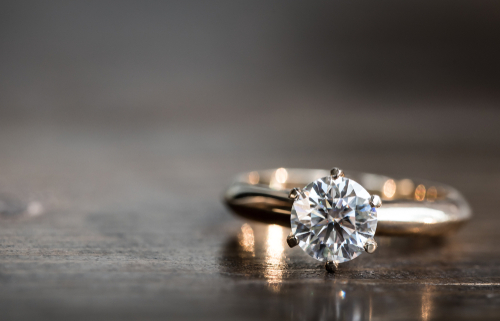 The trendy radiant cut diamonds really made a massive splatter in the world of diamonds. These awesome diamond cut is truly dazzling and eye-catching that its popularity rose further. There are many things which make the radiant cut engagement rings unique and special.

The radiant cut stone features a sparkly facet pattern in its crown as well as in its pavilion. The radiant cut stone has about 70 facets which could either be kite or triangular shaped. This gives a magnificent sparkle to the stone that shines bright from the center of the diamond. Another specialty of the radiant cut diamonds is its cropped corners. The diamond could have either a square shape or look rectangular based on the cut. This stone is really suitable for women of active lifestyle as it has cropped corners. Due to this characteristic of the stone it wouldn’t grasp anything easily.

The radiant cut stone has a shape that looks like to that of the emerald cut stone. However, unlike the emerald cut diamond, it would shine more brightly as a result of its unique cut. This stone could also be considered as a mixture of both, round brilliant cut and the emerald cut diamond as it showcases a square shape along with its cropped corners. Among all radiant cut stones, the finest one would be having a top surface that looks really flat, commonly called the table of the stone and this would make about 61% of the stone’s width.

Many diamond experts say that while choosing a radiant cut stone you shouldn’t go below the I color, because the stone is much likely to attract more color. Another impressive feature of this stone cut is its ability to hide its inclusions and therefore, it would be okay if you would stay at clarity of SI2 or higher when choosing this diamond cut. This means that it is not really necessary for you to give more importance to clarity when compared to the other Cs like the carat weight, cut and color of the diamond.

The radiant cut diamond was designed in 1977 by Henry Grossbard who is the founder of the RCDC Corp. Before the arrival of the radiant cut stone, the square-shaped stones were considered to be comparatively less sparkly than the other diamond cuts. Grossbard really wanted to show the world that it is possible for the rectangular and square shaped diamonds to have the similar brilliance of any other diamond shape. He eventually was able to create the step cut diamonds with an exceptional effluence which could compete with the awe-inspiring round, oval, or the ones having a pear shape. It is the awesome facet pattern present in the crown and pavilion of the diamond which increased its sparkle.

Jennifer Aniston during her marriage to Justin Theroux wore a stunning ring with an 8-carat radiant cut stone along with her yellow gold ring. The ring was truly incredible and sparkly.

The actress Drew Barrymore was proposed by Will Kopelman with an awesome radiant cut diamond that weighs about 4-carats. This beautiful diamond was set on a band full of smaller diamonds.

Lamar Odom proposed Khloe Kardashian with a massive radiant cut diamond that weighs about 12.5-carats. This spectacular diamond ring is said to have a value of roughly deabout $850,000.

Megan Fox was proposed by Brian Austin Green with a stunning engagement ring having a radiant cut diamond weighing about 3-carats. She wore this spectacular ring pairing it along with an eternity band that matched its beautiful design.

Ben Affleck proposed Jennifer Lopez with a beautiful pink Harry Winston radiant diamond weighing about 6.1-carats, at his early twenties. This beautiful ring is said to have a value of around $2.5 million.

It wouldn’t be very difficult for you to find an inspirational setting for your radiant cut diamond, as a large number of celebrities could be seen wearing these diamonds. Many buyers are confused on the setting that could maximize the sparkle of their radiant cut stone. The answer to this question is very simple; the radiant cut stone has an ability to sparkle when light ray falls on it. This means that you wouldn’t need any particular setting to maximize the brilliance of the stone. However, you would be able to find many buyers preferring a solitaire setting for this stone; this is to keep the diamond the centerpiece of attraction.